In letters addressed to Presidents George Bush and Barack Obama, Ralph Nader provides incisive critiques of more than a decade of American policy decision and indecision. Each letter offers frank advice and shines light on government mishaps and missed opportunities for progress. With his signature dry wit, Nader holds these Presidents to their campaign promises. He also boldly points to the ignoble and sometimes heinous decisions made in pursuit of party platforms and misguided ideals. Covering a range of still-current topics–including the Iraq war, torture, the Crimean annexation, the minimum wage, worker’s health legislation, and corporatism–these letters were wholesale ignored on receipt. Here they are reproduced to refute that fate in the spirit of true and healthy democracy. 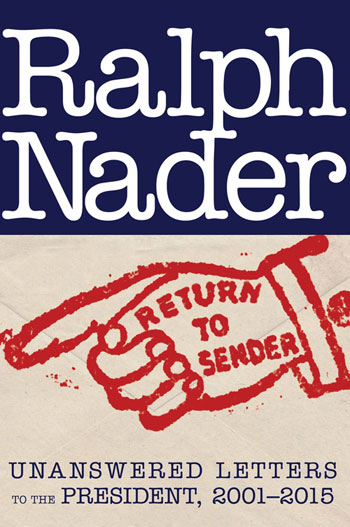 The Day the Rats Vetoed Congress

This hilarious, madcap novel imagining a rat invasion of Congress is a fable of citizen action and a call to advocacy.

The Ralph Nader and Family Cookbook

Presenting Lebanese dishes inspired by Rose's recipes that will be both known to many, including hummus and baba ghanoush, as well as others that may be lesser known, such as kibbe, the extremely versatile national dish of Lebanon, and sheikh al-mahshi.

An Incisive & Witty Roadmap into Trump’s Disinformation, Betrayals, and Emolumental Greed—Just in Time for Impeachment & the 2020 Race

How the Rats Re-Formed the Congress

A fable about rats that invade Congress and astonishingly trigger a peoples’ political revolt. It starts when a Congressional reporter breaks a strange and shocking story: “Rats have invaded the toilet bowls” of both the Speaker of the House and the Minority Leader. The mighty rat invasions spark a national news frenzy.

Nader brings together the outrages of the Trump administration with the key flaws and failures of the previous administrations—both Republican and Democratic—that have led us to this precipice.

Unsafe at Any Speed

This is what TIME Magazine said: “Politics and war, science and sports, memoir and biography — there’s a great big world of nonfiction books out there just waiting to be read. We picked the 100 best and most influential written in English since 1923, the beginning ofTIME … magazine”

Ralph Nader's newest work of the imagination, Animal Envy, is a fable about the kinds of intelligences that are all around us in other animals.

In Breaking Through Power, Nader draws from a lifetime waging—and often winning—David vs. Goliath battles against big corporations and the United States government. 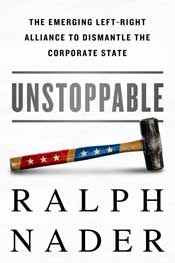 We are at one of the most pivotal moments in our country’s political history: Americans are more disillusioned with their political leaders than ever before and large majorities of citizens tell pollsters that big corporations have too much political power.

In letters addressed to Presidents George Bush and Barack Obama, Ralph Nader provides incisive critiques of more than a decade of American policy decision and indecision.

The Official Site of Ralph Nader