Homepage > In the Public Interest > Building a Renewable Energy Future

The U.S. has some big problems that require bold solutions. Unfortunately, books about solutions to our society’s problems are often given short shrift by reviewers or languish on our bookshelves. As I often say, this country has more problems than it deserves and more solutions than it uses. Now comes S. David Freeman.

In 1974 David Freeman, an energy engineer and lawyer, wrote much of and directed all of the research for the book, A Time to Choose: America’s Energy Future, a comprehensive early inquiry into America’s energy crisis. A Time to Choose offered ideas galore about how our country could use efficiency and conservation to benefit the environment and the economy and ushered in a new era of energy efficiency.

Freeman has also run several giant utilities including the Tennessee Valley Authority (TVA), the Sacramento Municipal Utility District (SMUD), the New York Power Authority (PASNY) and the Los Angeles Department of Water and Power (LADWP). After seven years at the TVA, he spent the next thirty advocating for and implementing environmentally sound and consumer friendly changes in energy policy. Mr. Freeman has been an innovator and leading authority on energy and environmental matters for a long time and knows what he’s talking about, so when he speaks up about energy policy we should listen. 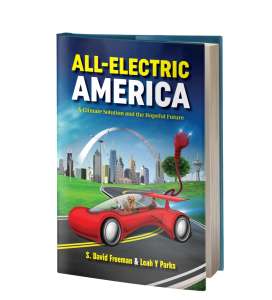 In January of 2016, in collaboration with his coauthor, Leah Y. Parks, he will publish a new and important book about our energy future: All-Electric America: A Climate Solution and the Hopeful Future. The book is scathing but optimistic, and manages to be bold while remaining pragmatic. Drawing on their combined years of experience, Freeman and Parks make the case for addressing the dangers of climate change with some concrete steps to counter our current downward spiral. Mr. Freeman argues that we will soon be able to power all of our energy needs with electricity generated completely by renewable energy as well as with increased energy efficiency in heating, cooling, lighting, transportation and our electric grid. The authors point out that:

Transforming our entire energy infrastructure to run on renewable energy by the year 2050 will require a larger effort than solely switching out our current electricity capacity. Investments in coal mining, oil and gas drilling and building new large coal, gas, and nuclear plants will give way to a massive increase in the construction of solar and wind power plants.

It comes as no surprise that this book rejects the indiscriminate “all of the above” approach (coal, oil, gas, nuclear, solar and conservation) to generating energy and argues that we have a leadership gap when it comes to developing a clean, safe and efficient energy policy that can boost our economy:

Rapid progress toward an all-renewables future is being stymied not by lack of technology, or even by cost or market demand, but by lack of vision on the part of our political and business leaders, and lobbying and persuasive advertising by the oil, gas, coal, and nuclear industries.

President Obama, environmentally minded political leaders and most of the major environmental organizations have been promoting both the “green revolution” and the “brown surge,” supporting both renewables and the continued use of fossil fuels. They have failed to hammer home the message that a completely renewable future will be lower in cost, as well as necessity if we are to halt global warming, much less propose programs to make it happen. This is despite the fact that a long-sought bipartisan goal of U.S. energy policy has been to achieve energy independence. An all-renewable supply is the best way to do so.

By reducing emissions by 3 percent each year, the authors argue we would be capable of achieving a zero-emissions society in 35 years. The book manages to reconcile its lofty goals with sensible policy prescriptions. Big items on the agenda put forth in this book include:

Creating a Federal Green Bank, which provides loan guarantees (not loans) for the financing of railroad electrification and for the construction of renewable electricity power plants;

Requiring  that all new homes and buildings be Green House Gas (GHG) -free and existing buildings be retrofitted to zero GHG at time of sale or within fifteen years; and

Requiring all major auto, truck and bus manufacturers to reduce GHG emissions of vehicles by 3 percent each year, through a combination of improvements in mileage and lower GHG emissions.

The authors also note that big energy companies and their campaign contributions from the fossil fuel and nuclear industries have stifled sound, sustainable energy policies but how, with a little focused “civic energy” we can motivate industry and utility companies to adopt cleaner practices and policies that can make 3 percent annual emissions reductions not only feasible, but profitable.

The authors also challenge the notion that nuclear power and natural gas will eliminate our climate change woes and argue that renewables are a better financial bet for the consumer than oil, coal, natural gas or nuclear power for several reasons:

Nuclear power is a poor economic risk, requiring full government (taxpayer) loan guarantees, and also because no private insurance is available for an accident that causes billions of dollars of damage.

There are no fuel costs for solar and wind maintenance and it is thus virtually inflation-proof.

Renewable costs are going down while the price of oil fluctuates with an upward trend. The future price of natural gas is most likely to go up.

The savings in the indirect cost of renewables over coal, oil, natural gas and nuclear power are profound. Some indirect costs include damages from environmental contamination, climate change, health expenses, managing the risks of nuclear power and military commitments—including deployments and even wars to safeguard oil from the Middle East.

When All-Electric America comes out in January of 2016 you will have a chance to make yourself knowledgeable about the real avenues available to us to transform our energy infrastructure for present and future generations by moving toward a new renewable energy economy with far more jobs, health, efficiency and security benefits than there are in relying on hydrocarbons and radioactive atoms.

To listen to my interview with David Freeman, visit ralphnaderradiohour.com

January 9, 2020 By Ralph Nader Many Americans have forecasted that the outlaw Donald Trump will commit even more illegal…
Read More
Dec 31, 2019

In a letter to Senate Majority Leader Mitch McConnell and Speaker of the House of Representatives Nancy Pelosi I, together…
Read More

The Official Site of Ralph Nader